mom and dad vs. Olivia vs. the moth 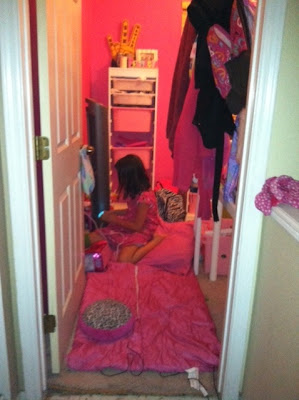 First things first. It wasn't until I captured it on film that I realized just how much pink lives in my daughter's bedroom. This might be excessive?

And ironically, this involves another moth. I'm wondering if perhaps there's a symbolism here that I haven't quite picked up on yet.

As I mentioned in my previous "mothra" post, my daughter has an almost phobia-level fear of bugs. Especially moths. Well, when I redecorated her room several months ago, we got her a loft bed; and she sleeps right by her air vent. Guess what likes to fly in?

So when they do, she she gets Daddy, and he patiently and somewhat ceremoniously kills the moth for her. But lately, just the thought of a moth appearing has her afraid to sleep in her bed. The issue has grown into a flat out refusal to get into her bed at night; the fear of moths being a fabulous excuse to beg to fall asleep on the couch or cuddle with Mom and Dad.

So, what's really going on?

We got a little lazy this summer and, every now and then, let her fall asleep on the couch while we all stayed up a little later and watched TV. I think that the new school routine and having to fall asleep in her dark, quiet room by herself is far less appealing, even when we've spent hours crafting the perfect iPod mix for her to fall asleep to.

And then there's a new school year, and the anxiety that comes along with that. She was excited, but anxious, as any kid would be; but I'm beginning to worry there may have been more anxiety there than I originally thought.

So ultimately? I am not so sure it's really completely about moths, or bedtime routines or school anxiety. Those all play a part; but in the end, when voices get raised and ultimatums are laid down, it's all about control. For her, and for Larry and me. She refuses to get into her bed, and we stand our ground and say no, you can't sleep in our room, and you can't fall asleep down on the couch. You must go to bed.

Larry and I stand our ground, and then afterwards, when the tears are dry and the eyes are swollen and everyone feels bad, we think - should we have been a little more sensitive about this?

On the one hand, we are concerned that if we give in, then she'll know that a tantrum will net the results she's aiming for. Kids need to sleep in their beds, period. Even though we let it slide a little in the summer, we don't believe in just sleeping where you drop at the end of the night; routines are important, no matter how old your kids get.

But - I also think there's a genuine fear here, and anxiety, that we need to address. We can't just say, "That's silly, don't be afraid of moths, they won't hurt you," and expect her to be all "Oh, okay, I guess I'm not scared any more." Yet in our rigid reactions, this is what it appears we expect.

Where is the happy medium? When do we stop being firm but reasonable parents, and start being insensitive tyrants? And when does her genuine fear turn into a mechanism for her to try to manipulate situations and get what she wants?

So this is where we're at. We told her she has to sleep in her room; she insists on sleeping on the floor. So we're letting her do that. But you'll notice in the picture - she has that sleeping bag almost out the door; she is as close to being out of her room as she can get. Is that really because she's afraid of the moth, or is that her grasping at her last bit of control?

Truthfully? We need to not worry about it - and let her wake up with a sore back enough nights in a row to where she crawls back up into her bed on her own. And we need to NOT wave the "I told you so" banner in her face when she does.

Today was a half day, and I told Olivia that before she played with a friend she needed to clean her room. She came into my room where I was working to let me know that The Moth had returned, and it was over her bed. She was playing it so cool - she was really trying hard not to freak out. We spent the next 30 minutes trying to catch it; me thinking, this will be great - when she realizes this moth is dead, maybe she'll get back up in her bed.

Finally, I killed the moth. She watched me whack it on the wall, could see the guts splattered all over the hot pink paint. Still, she walked up to the spot where it fell, and calmly asked where it was.

She had to see that dead moth - even though she watched me kill it.

Still playing it as cool as she could, she asked me to take it from her room, which I did. I walked back into my room and tossed it in the trash.

Liv came back into my room, and said with a big smile to mask her anxiety, "You know Mom, whenever Dad kills a moth he flushes it down the toilet."

"But Daddy always flushes it down the toilet."

I'm not getting out of this. So I go back to the trash, and pull the paper shroud; the dead moth has totally fallen out of the tissue. I'm not digging him out, so I have to fake it. And I almost don't get away with it.

I take it to the toilet, Liv following my every move. I drop the tissue in.

"Yes," I say, feeling a little guilty over my little white lie. Then I flush, quickly.

She finished cleaning her room, and the sleeping bag is still on the ground, so I don't think she's given up the fight just yet. But I'm hoping today's ceremonious killing, along with our effort to relinquish some control, soon leads to the end of our nightly struggles.