One morning a couple of weeks ago, Olivia and I were leaving the house to head to the gym. It was hot - oppressively hot. We are in monsoon season here in Arizona, which means our obscene heat is paired up with humidity, which is just a little bit like hell on earth.

Right beside my front door I have a planter with a few native faves, including a giant lantana bush. Lantana is really just a big, itchy, prolific flowering weed that survives in the desert heat, so everyone has it in their yard. I found one with maroon and gold flowers, so I proudly planted it by the front door in homage to my alma mater, Arizona State. And thanks to the nasty heat, it hadn't been trimmed in way too long. Big, tall, bushy, and overgrown.

So as Liv and I stepped out of the door that morning...I heard a rattling sound. At first I thought it might be a broken sprinkler head; but seeing as how every time I moved, or bumped the lantana, the rattling sound started up again, my mind immediately went somewhere else.

Rattlesnake. I had heard on the news that some desert creatures were heading further into civilization, probably due to the drought or something, I can't remember. It didn't matter. I'd heard it, and suddenly, there was no doubt in my mind that my Sun Devil lantana was sheltering a giant poisonous snake, poised to either strike the first person who walked through the front door, or worse - find a way to slither into my house.

Priorities firmly out of whack, I left it there, got in the car, and left. And admittedly, there were still three kids in my house, one of which wasn't mine. But I had to get to my Barbell Strength class, right? If you don't get there early, you get stuck in the corner with no room to move.

As we drove to the gym, I got out my phone. I wanted to call the boys to tell them to stay in the house; but I've been trying not to use the phone when I drive (except maybe to check facebook at stoplights, that's all, I swear), so I had Liv call them. She was delighted. A chance to call her brothers on behalf of mom and tell them what to do? Irresistible. So she called, and they promised to stay inside. Mmm hmm.

At the gym I was telling my girlfriends about my possible reptile infestation, and how Liv had called the boys for me. They looked at me, like, Robyn, really? Smirk. You really think they are going to take that seriously coming from their little sister? What's the very first thing they're going to do the second they hang up the phone?

Of course I did stay for class, and just said a little prayer that no trip to the ER was going to be needed when I returned home. I also prayed that the noise would still be there, because if it wasn't, I was going to obsess that the snake had gotten into my house. I can't even go there, people.

So we flew home after class. Griffin and I went out back and got some of the giant long pool poles so that we could try and lift up the lantana and see how big our rattler was.

We poked. It rattled. It almost sounded like maracas - perfectly timed, mechanical maracas. Loud. Me = terrified. I decided okay, I have to do it - I slipped the pole under the lantana and lifted it up. I had absolutely no clue what I was going to do if I saw that snake. Except run of course. Slowly, slowly, I lifted...rattle rattle...but no snake.

Griffin crept a little closer. "Mom, what's that big white fuzzy thing under the bush there?"

I looked, and saw what looked like a tiny bird. "I have no idea, buddy," I said. "But I am totally not seeing a snake right now."

Feeling a little braver, we both crept forward. And it rattled - the white fuzzy thing, that is.

Flooded with relief, I put down the pool pole, and Griffin and I dislodged this giant creature from underneath my lantana. It clearly was gasping its last breath; the rattling was getting weaker, and he looked a little, well, nasty.

(We recently had a bug company come out and spray the house, and I'm wondering if this fella got a whiff of the poison or something. And...if he has any relatives who are still whoopin' it up somewhere inside my house.)

Of course I immediately snap a photo and send it to Larry. It's not a rattlesnake!!! I text. His message back to me: Watch out for Mothra. She's mutated, pissed, and on a rampage.

I tease Larry mercilessly about his wealth of useless knowledge. I guess in this case, Mothra is a giant moth from the Godzilla movies.
Well, I thought the story would end there. I thought, this would make a fun blog - mom terrified that there's a rattlesnake in the bush when actually it's only a bug. But first I have to take that bug inside and take a photograph of her next to a ruler - she's huge!

So I get a little Ziploc bag from the kitchen, load up Mothra, and take her inside. By now she's good and dead. I walk into the house, and Olivia promptly screams bloody murder. My daughter has an unhealthy fear of bugs, and I've just carried in a gargantuan specimen and tossed it on the kitchen table.

"Mooooom! Get that out of here! I can't be in the house with a bug that big! Mooooommmm! I can't do it!" Borderline meltdown.

Okay, okay. I put Mothra, encased in her plastic zip top shroud, on the back porch. The boys, on the other hand, were fascinated with it.

Naturally, I got busy. I forgot about Mothra. A few days later, I found her still outside in the baggie. I thought, I really have to write that blog. And if I leave her out here she's going to cook. So, I brought her inside and put her up on the ledge in the kitchen. 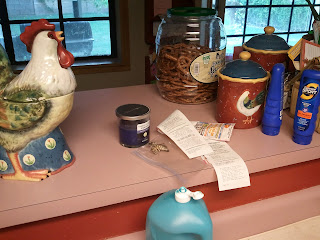 Where she sat for another week.

Tonight after dinner, Connor said, mom, why do we still have this giant bug on the counter?

Pffft. I totally have to write that blog.

So here I am. And I finally photographed Mothra next to the metal ruler, as I originally intended, although now she's dead and dry and shriveled up. I think she was a good half inch longer when we first recovered her. 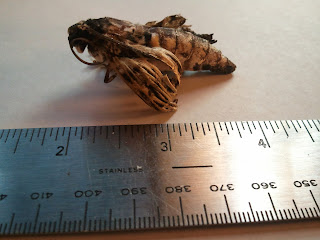 Discussion with Larry after finally getting my photograph.

"What should I do with her now?"

"I feel funny throwing her away."

Pause. Why on earth are we talking about this?

"I'm going to throw her away."

I had to pop by..I freak out completely with bugs..Poor hubby has to "rescue" me. I always call moths Mothra when I find one! I start yelling "Mothra" and hubby comes running. Yours would have sent me over the edge! Love the "keep" it..ha ha ha.