Um - now that I think about it, and as dull as I now feel, I have to admit that I never, ever tell jokes. Not in the traditional sense, anyway. I saw "kids" as the July theme, and assumed they meant, like, my three monkeys. But me, a kidder? I'll have to give that one some thought. I don't get funny until I'm about three drinks in, and then I start to teeter on the edge of not remembering what I said that made everyone laugh, which does me absolutely no good here, unfortunately.

So I'm trying to summon my creative interpretation brain cells, the ones that helped me get a B in Shakespeare 450. I was an English major, but (gasp!) I really didn't care for Shakespeare; however I could creatively interpret story lines and craft accompanying essays that had the professor thinking I was cheating on my papers (for real - I kept an essay where he'd written a note reading "I need to see your notes on this" before erasing it and giving me an A).

So anyway, in thinking outside the box, I'm going to count a joke as something funny I shared on facebook from someone else's status. It's the best I can come up with. And let me preface it by saying that while I get a kick out of reading these things, I only share them once in a rare, rare while.This one had me howling out loud in my office as I trolled facebook instead of working.

You likely have seen it already, in which case it probably isn't that funny any more. But for whatever reason, this got such overwhelming response on my facebook page - perhaps because, who doesn't want to head straight to McDonalds after eating four bites of rubbery chicken and bland rice? 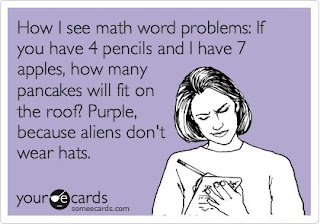 Okay, it's an hour later, and stop the presses! Now that I said I never post these things, I just saw and posted another one tonight, so I feel compelled to share for joke day. My 10th and 8th graders loved this one.


Right? 8th grade algebra? Let me remind you about being an English major.

Both were funny...No way are people full on Lean Cuisine and the second was me in school...I never got those word problems. Now I understand, it was what I "heard". Have a great 4th!